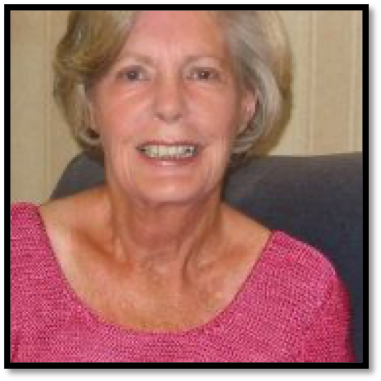 Gloria Seaman Allen died November 16, 2019 in Naples, Florida at the age of 81. She was one of the sampler community’s most prolific authors and a fine scholar. She will be missed greatly, both as a professional and as a person. Gloria had a passion for studying textiles of the Chesapeake Bay area and much of her early career focused on the study of Chesapeake regional quilts and bed coverings. From 1980 to 1990 she was Curator and then Director of the Daughters of the American Revolution (DAR) Museum in Washington, D.C. and it was during this time that she developed an interest in schoolgirl needlework. For sampler lovers and scholars, a major contribution while at the DAR was her 1989 exhibition entitled Family Record: Genealogical Watercolors and Needlework, which was accompanied by a groundbreaking exhibition catalog that validated the use of women’s material culture and personal artifacts within the field of genealogical research. In 2000 Gloria received a Ph.D. in American Studies and Material Culture from The George Washington University and for the next 19 years worked as an independent scholar and historian. She produced three major books, each an exhaustive study of schoolgirl samplers and related girlhood embroidery from a specific geographic area: A Maryland Sampling: Girlhood Embroidery 1738-1860 published in 2007; Columbia’s Daughters: Girlhood Embroidery from the District of Columbia, published in 2012; and Delaware Discoveries: Schoolgirl Samplers from 1750-1850, published in 2019 (co-authored with Cynthia Shank Steinhoff). Gloria had an amazing ability to attract dedicated and talented scholars to assist with the research for each book and empowered them to specialize and contribute in their individual fields of interest and expertise. In addition to her books, Gloria wrote and published numerous articles (see below), authored or co-authored exhibition catalogs and gallery guides, and curated or co-curated several exhibitions. Particularly noteworthy were her contributions to the 2007 exhibition at the Maryland Historical Society entitled Maryland Schoolgirl Samplers and Embroideries, 1738-1860. On display were more than 100 Maryland samplers and related girlhood embroideries, arranged by region and religion. Included were samplers by students who attended Baltimore’s “School for Colored Girls” run by the Oblate Sisters of Providence, believed to be the first time that schoolgirl samplers stitched by African American girls appeared in an exhibition. Also noteworthy were Gloria’s contributions to the Sampler Archive Project, for which she served on the Advisory Board from its inception. She was instrumental in helping to conceptualize and codify the documentation process used by the Sampler Archive Project and she was an active participant in planning and writing its first successful grant application to the National Endowment for the Humanities (funded in 2011). In addition, Gloria was a key player in the Sampler Archive Project’s first statewide sampler initiative, the Delaware Schoolgirl Sampler Initiative, designed to locate, photograph and document schoolgirl embroideries in the state’s public and private collections. This led to a 2014 sampler exhibition at the Biggs Museum of American Art in Dover, DE entitled ‘Wrought with Careful Hand’: Ties of Kindship on Delaware Samplers, a symposium by the same name, and a richly illustrated scholarly exhibition catalog sharing the team’s research and interpretive conclusions (co-authored with Lynne Anderson). Both the exhibition and the catalog benefitted greatly by her involvement and leadership. For those of us who have known and worked with Gloria in the interest of learning new things about schoolgirl needlework, her passing has left a gaping hole. In the words stitched on a Delaware sampler by Elizabeth Lewis in 1829, Gloria has “lived respected and died lamented.”

Below is a list of publications by Gloria Seaman Allen that focus on the study of schoolgirl samplers and related girlhood embroideries. 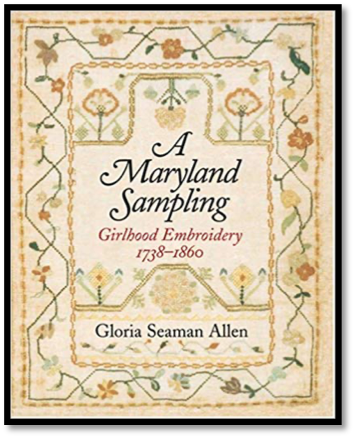 From the cover: Presents an extraordinary assemblage of Maryland samplers and pictorial embroideries that to scholars, collectors, and modern-day embroiderers. Students of women's history, the decorative arts, and Maryland history will discover more about the role of needlework in early female education and in the lives of ordinary women in the changing currents of Chesapeake regional history…embroiderers will find inspiration in their designs, and genealogists will gain valuable insights into Maryland families and their migration patterns. 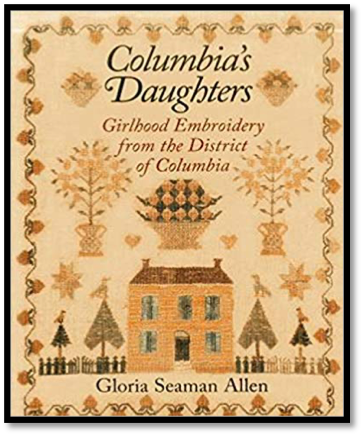 Columbia’s Daughters: Girlhood Embroidery from the District of Columbia

From an overview published in Samplings: A regional study of the samplers and pictorial embroideries wrought by girls in the late eighteenth to mid-nineteenth centuries in three communities: Alexandria, Georgetown, and the new federal entity called Washington City. Although the three areas were merged to form the District of Columbia, their political, economic, and social dynamics varied greatly. This in turn affected the education available to girls and young women living in the District, and their access to needlework instruction. 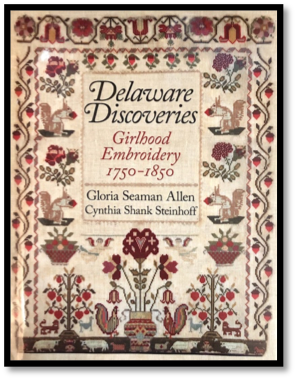 From promotional material: A lavishly illustrated history of girlhood embroidery in the state of Delaware, from 1750 to 1850, including beautifully rendered photographs of 190 samplers. This magnificent volume includes well-researched biographical information on the young embroiderers and their families as well as information on prominent needlework teachers and themes.

For more information see an overview of the book by Cynthia Shank Steinhoff, co-author, published in Samplings. 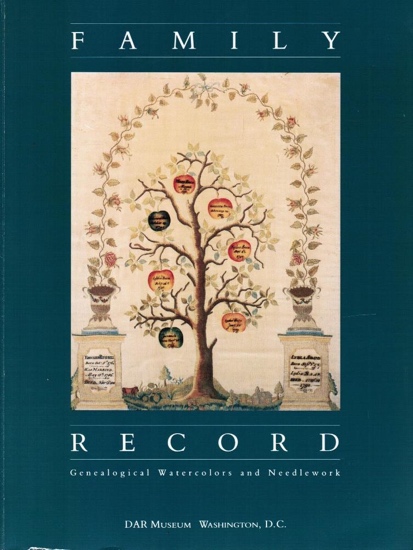 104 pages, with both color and B&W illustrations.

Exhibition catalog for an exhibition of the same name at the DAR Museum in Washington, D.C. Jan. 30-May 14, 1989, curated by Gloria Seaman Allen. Includes information and images of various types of family record samplers and schoolgirl paintings from across New England and the Mid-Atlantic states. 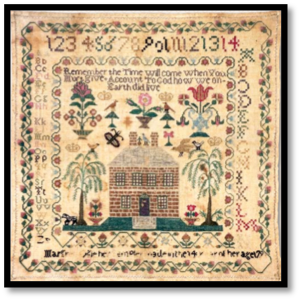 Article and PDF about the Maryland Historical Society’s exhibition of samplers, guest curated by Gloria Seaman Allen. Open April 14 to Nov 15, 2007, the exhibition had more than 100 Maryland samplers and related girlhood embroideries, arranged by region and religion. Included were samplers by students who attended Baltimore’s “School for Colored Girls” run by the Oblate Sisters of Providence, believed to be the first time that samplers by African American girls were in an exhibition. 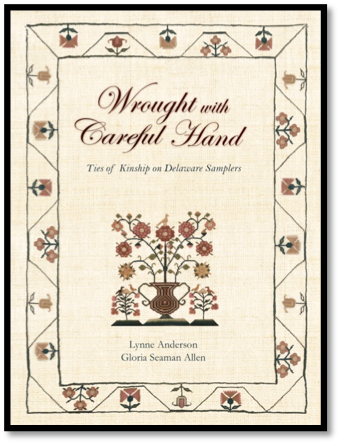 'Wrought with Careful Hand': Ties of Kinship on Delaware Samplers